A while back I promised myself I wouldn't buy any more guitars until I got all my broken ones in working order...and well, I've done a pretty good job of sticking with that, but at $100 I couldn't pass this up. This model is from the late 00s. I actually had one of these in 2010ish and regretted selling it. The necks are just so comfy. 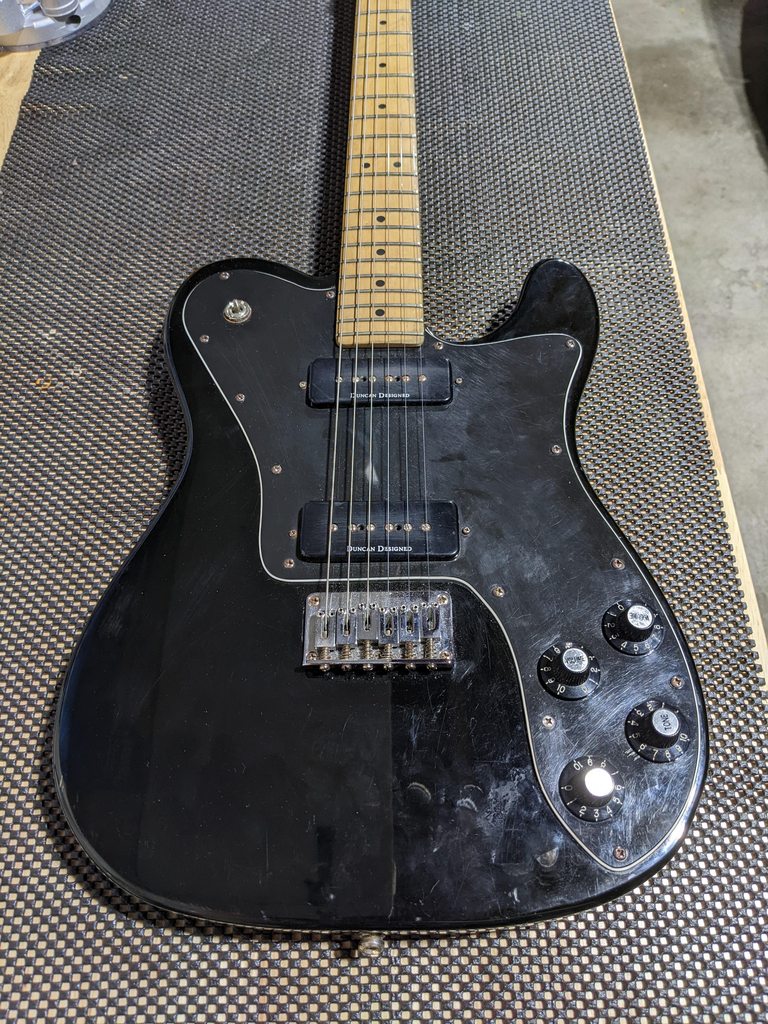 That $100 price point is reflected by the fact that it's pretty beat up. It almost certainly spent a lot of time in a humid climate...all of the screws have surface rust. And the body has severe damage on the back which looks like it was covered up using a Sharpie. 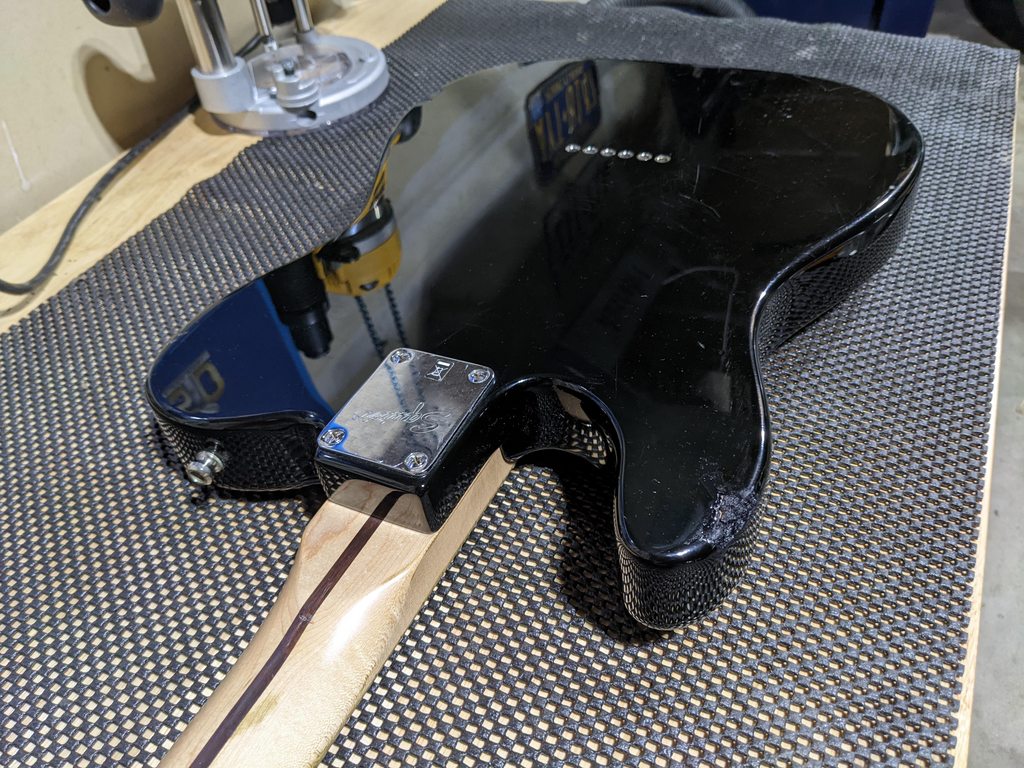 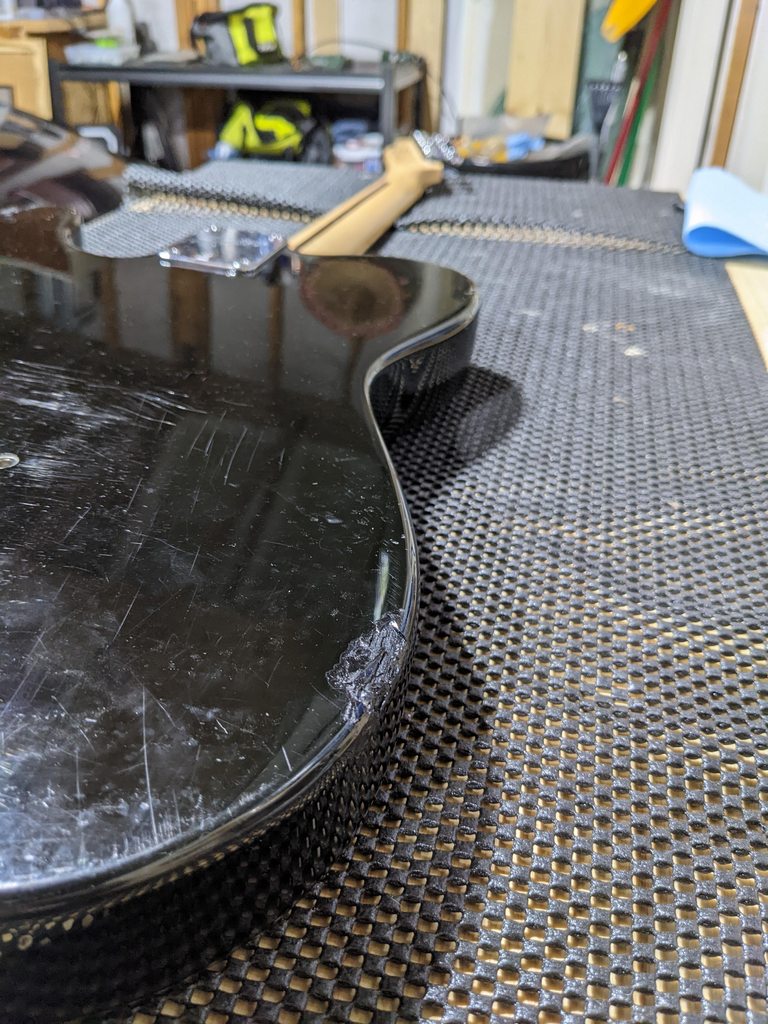 I've been wanting to try my hand at repairing body damage without doing a full refin, so this is perfect. I haven't yet decided what I'll do with it otherwise. But first things first...it'll get a good cleaning and new hardware.

Given that it's a cheap guitar, I'm staying cheap. Like maybe this bridge. And inexpensive split post tuners. I can't believe the price on those tuners especially...based on the reviews, I see no reason to pay double (or more) for a name brand on this guitar. Wouldn't be surprised if these are the exact ones that come on Classic Vibe models like the title says.

After that I'll start on the dents in the back. My first thought was to use Bondo, but maybe a quality wood filler would work just fine? It's been years since I've worked with either. I think I'll have to poke around a bit. At a glance it looks like I might be better off peeling off some of the damaged bits to get a cleaner surface.
Top

Good score! I bought a cheapie set of white button tuners like that for my Telecaster, they might not be as smooth as the real Klusons on my Cyclone, but they work well enough and look nice. I'd say on par with the modern Squier tuners.
Top

Alright, finally getting started on this thing. Rather than work on the body damage, I decided to get it playing first. The frets were pretty beat up, and I wanted to try doing a level and crown. Amateur hour up in here but I'm satisfied with the results.

A couple things surprised me after taking the neck off. It has a skunk stripe, which isn't needed considering that the fingerboard is 22 fret, so it's a separate piece glued on. Also, in the heel there's a spot for where a micro-tilt adjustment would go, like certain Fender models have. Maybe they used a similar CNC template back then? I know some rosewood board Strats have the stripe. 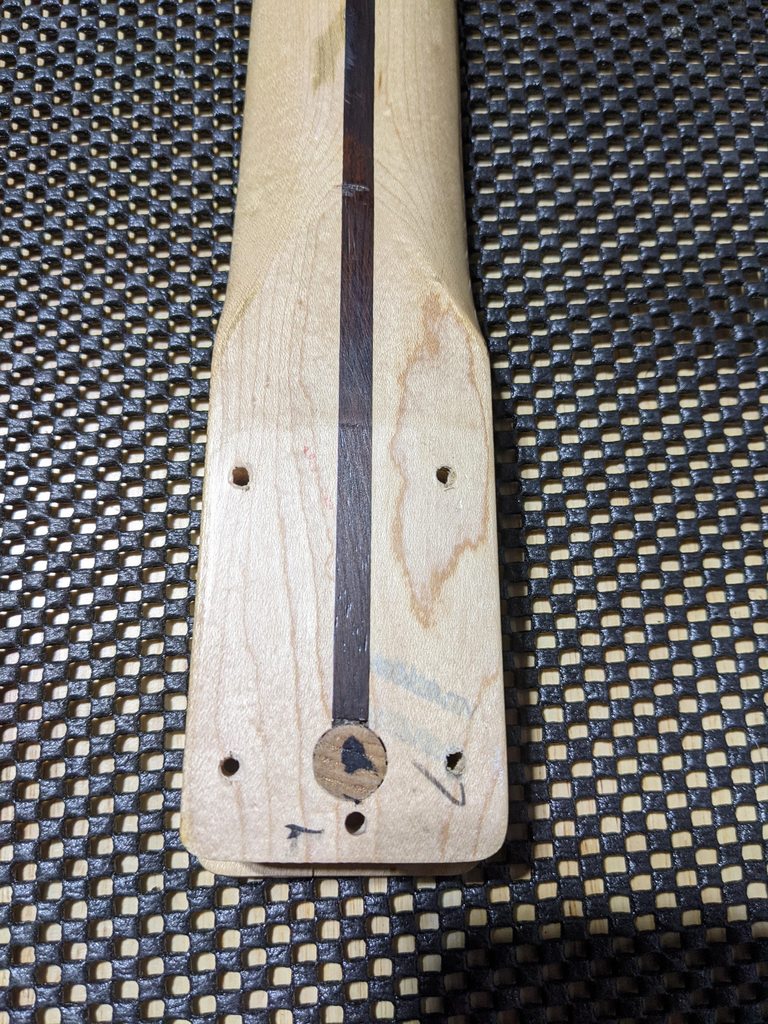 First time using this tool to fix frets poking out. It works amazingly well, but it does dig into the wood, on this neck at least. I love rolled fingerboard edges so I didn't care. In the second pic you can still see how dented the frets were. 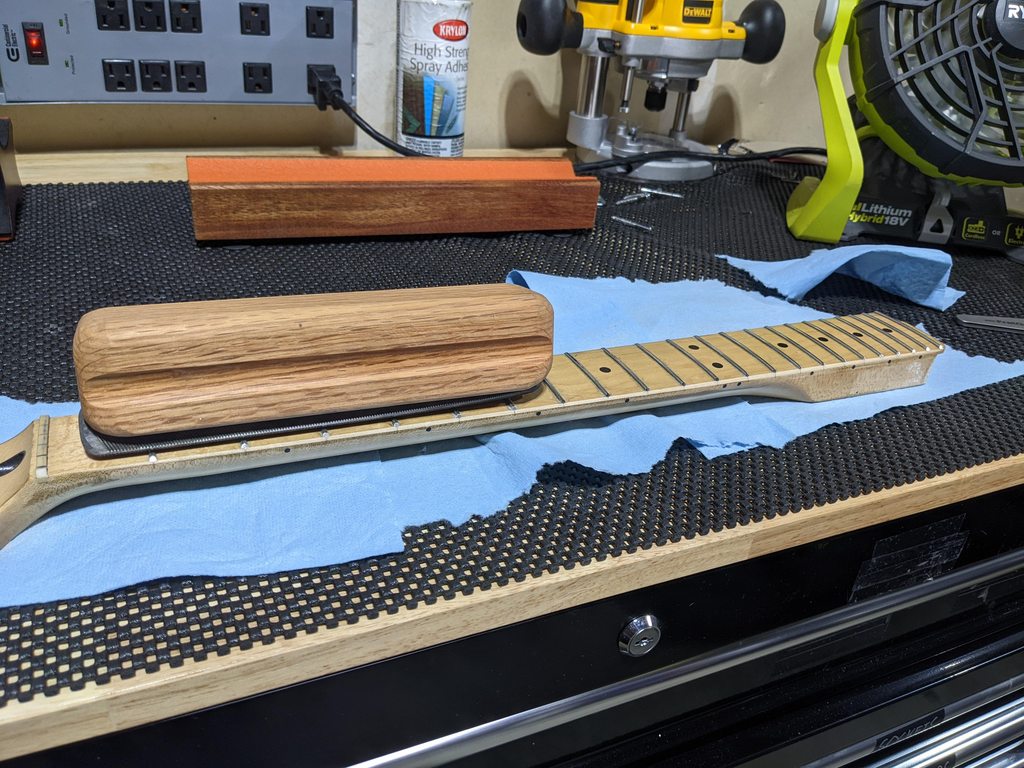 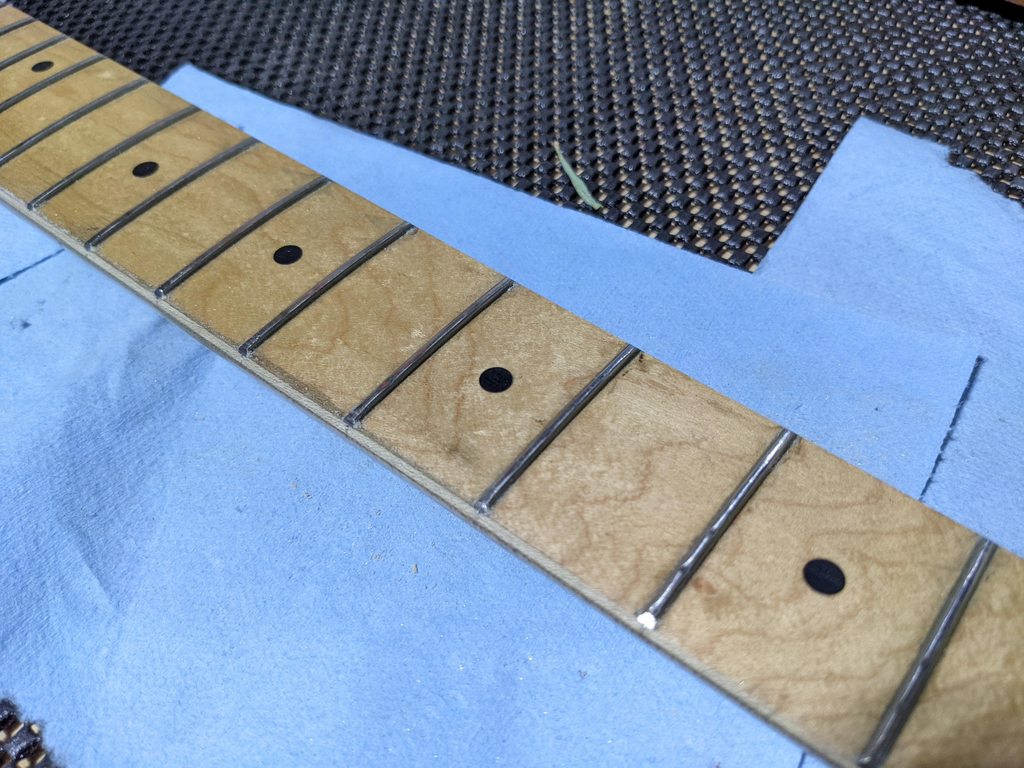 I then hit it with some 400 grit sandpaper on a 9.5" radius sanding block to try to get those dents out. I figured anything lower would be too course, but in retrospect 180 or 200 probably would've been fine. Because... This fret file is course enough that it needed to be sanded again afterward anyway, just to clean it up. Didn't get pics of that process though. 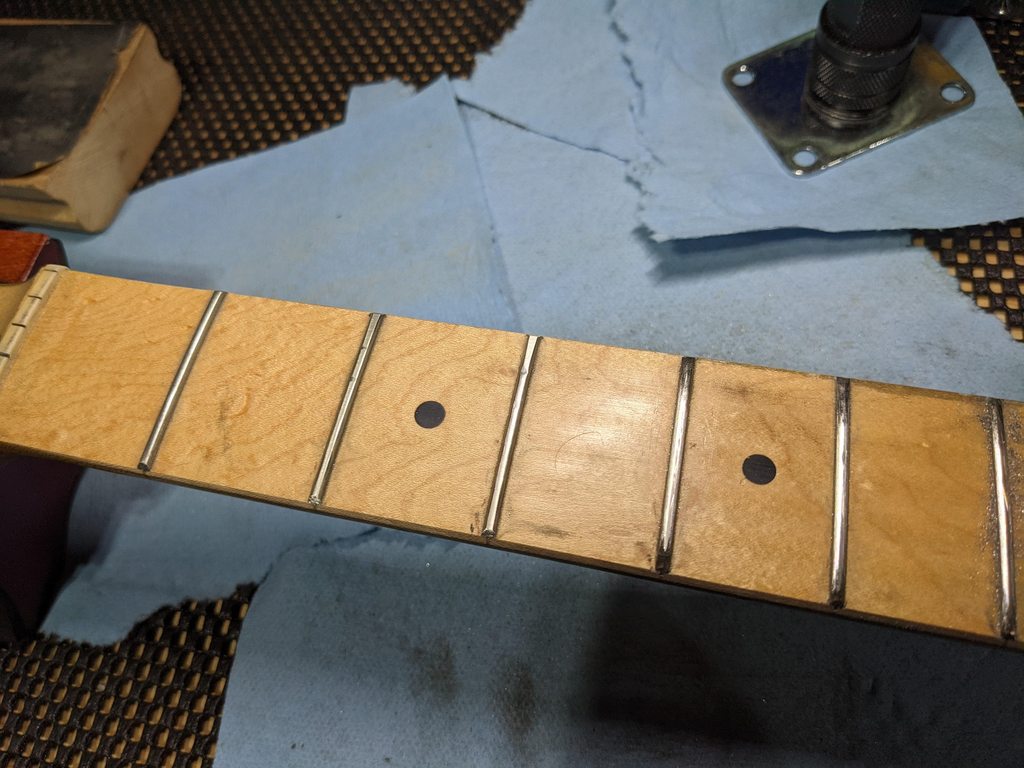 Lastly I decided to sand the headstock clean. Nothing against Squier obviously, but to me this particular logo doesn't look right on a Tele headstock, with the "by Fender" subtext pushing "Squier" up, and "Telecaster Custom" not really fitting on it. I was surprised how hard it was to get off...it's like it got burned into the headstock, with "Telecaster" taking some extra effort to sand through (still seen in second pic).

Afterward I just put tung oil on it, thinking it'd be a good match, and it is. There's even a bit of birdseye in it. Think I'm gonna go ahead and install the new tuners, put it back together with the new bridge, give it a setup and go from there. 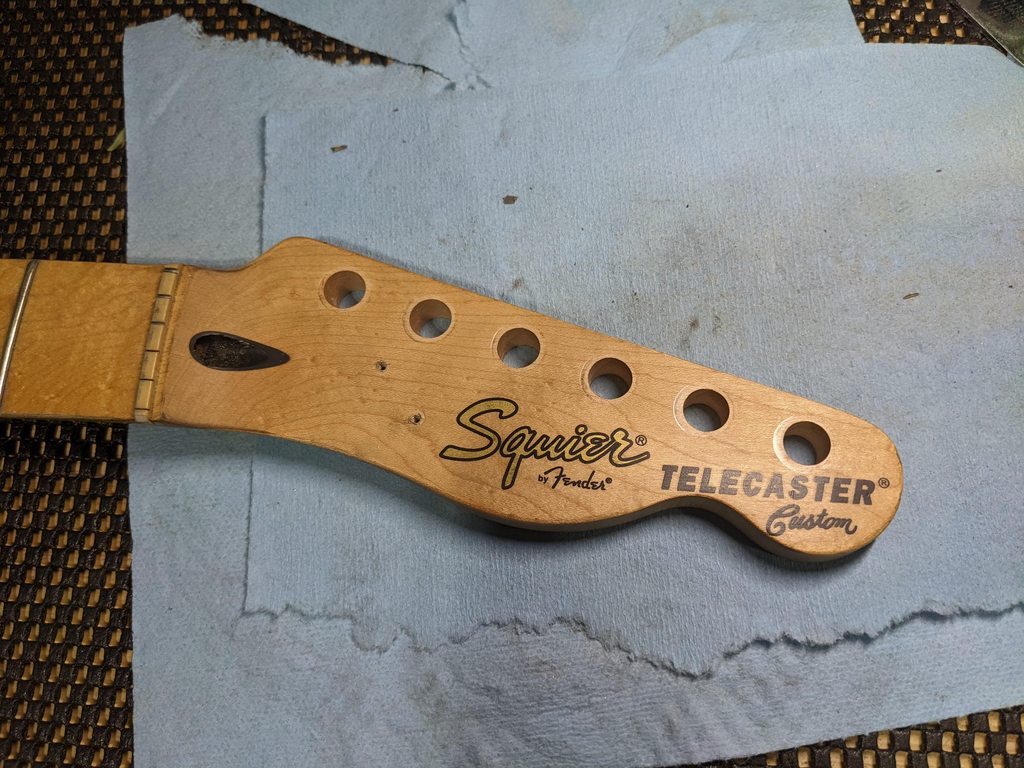 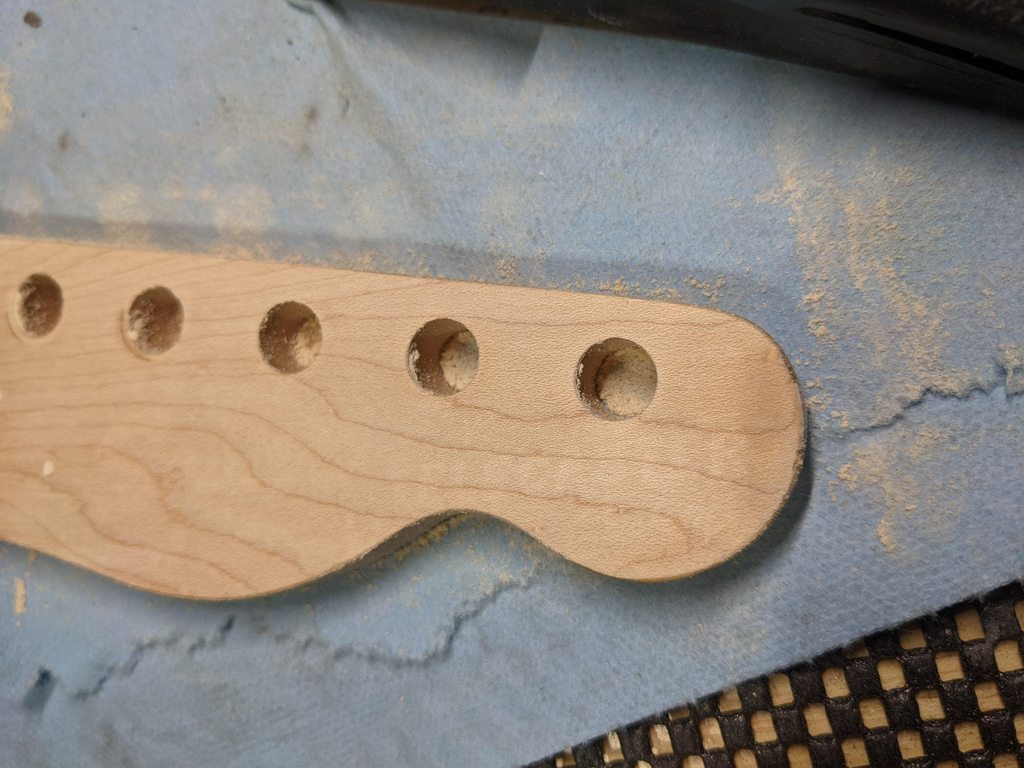 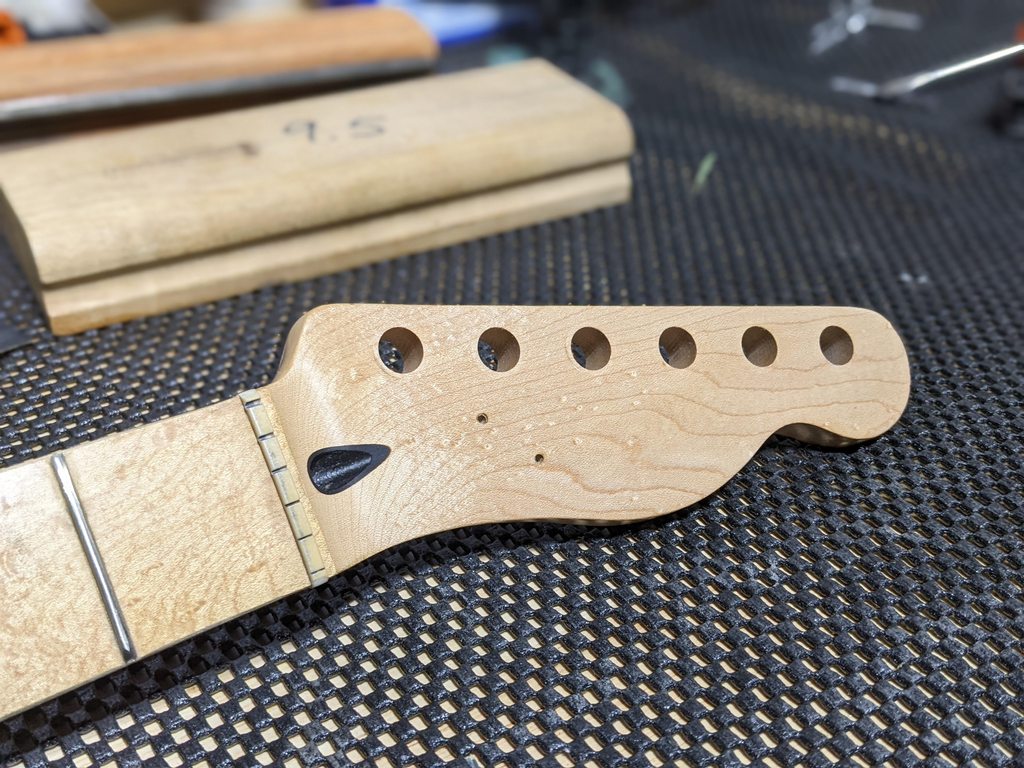 Turned my attention to the body for a while. Either a previous owner had the most acidy acid sweat ever, or it was left out in the rain. How is there rust under the bridge?! Under all the hardware actually. 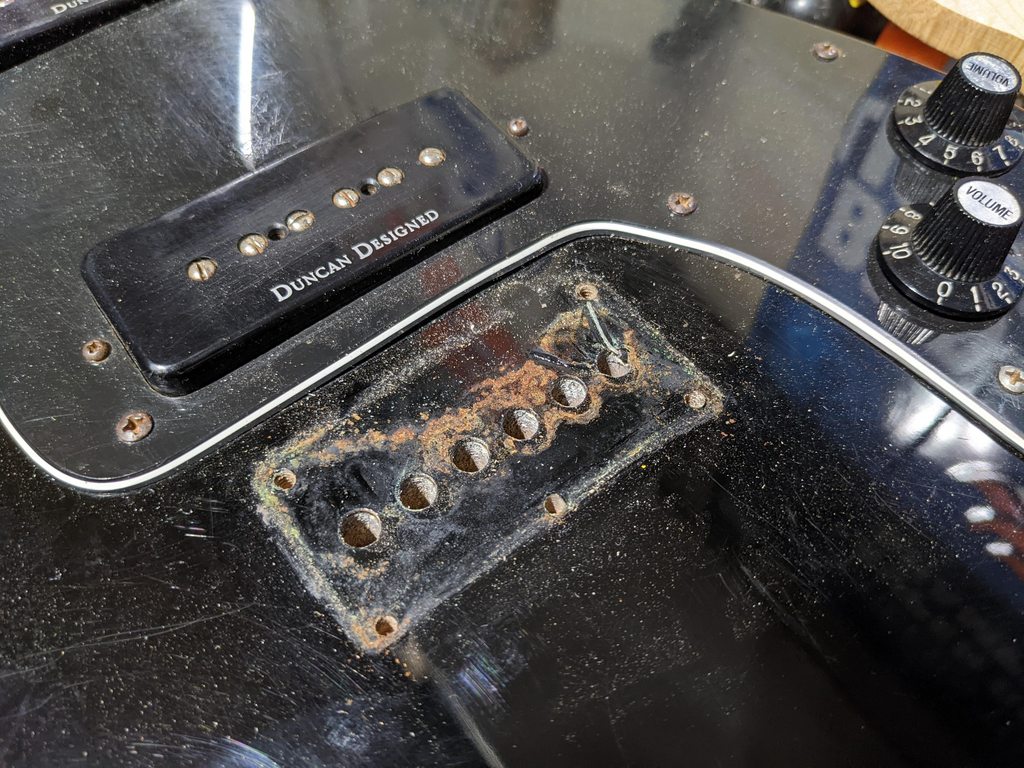 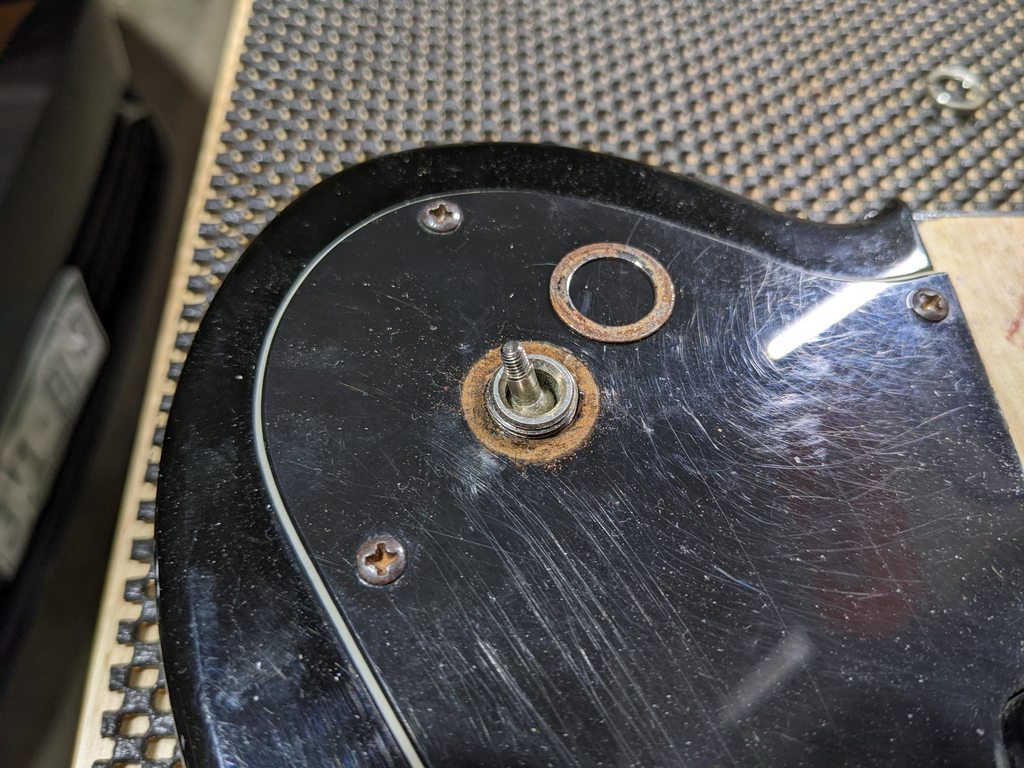 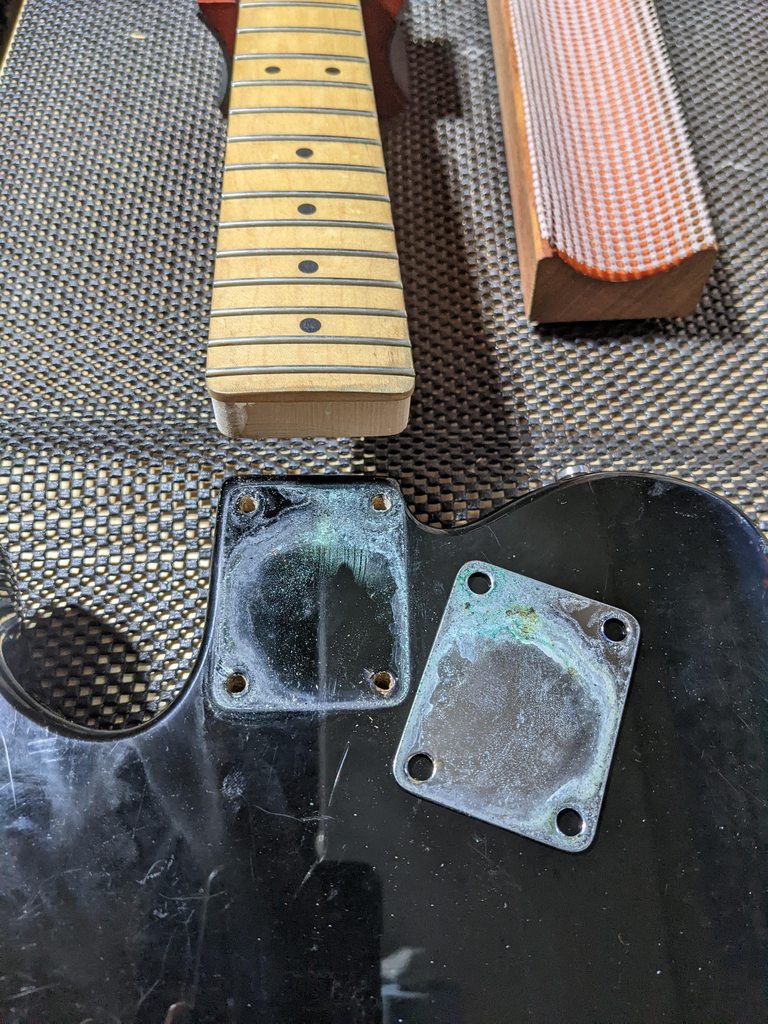 The new bridge has a different mounting pattern so I had to drill new holes, but that was no sweat because it had to be moved toward the neck compared to the factory one. Cleaned up the nastiness around it and it's a start toward making it into something nice. 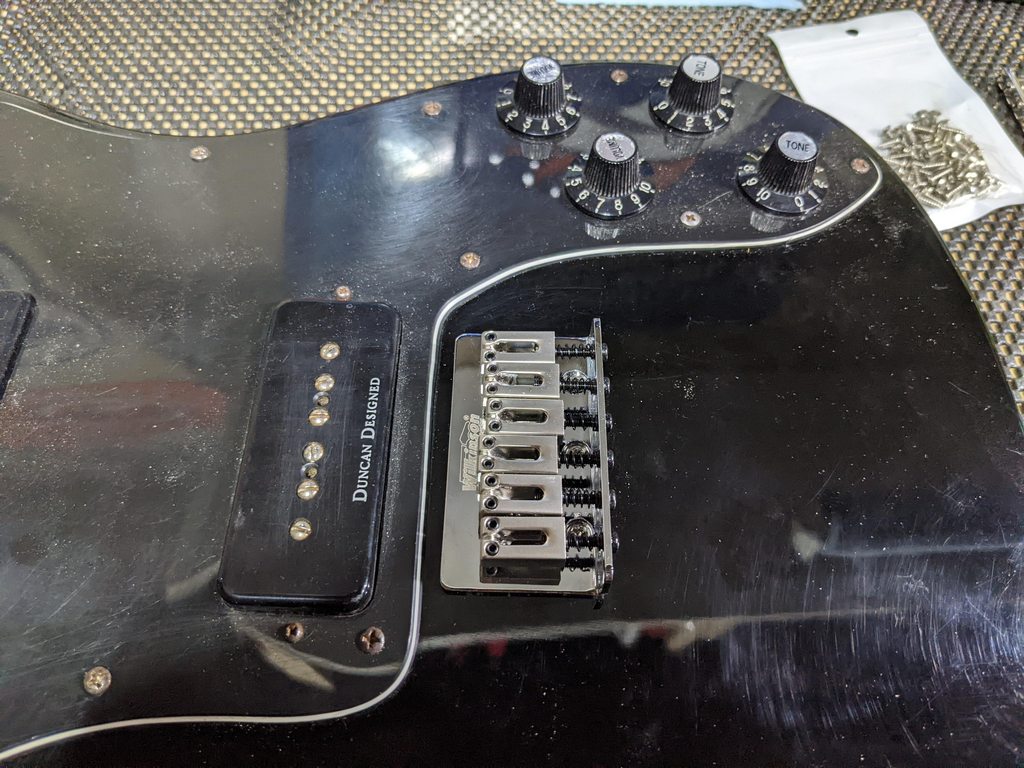 Then I decided to see what's under the hood. Thought maybe these could actually be some fancy pickups with a Duncan Designed cover...?

Nope, no such luck. And, interestingly, it might not be easy to change the cover. It's like melted on where the leads come out. Also, someone has been in here before. Looks like factory wiring, but not a factory solder job. And there's the pick used as a shim in place of washers. 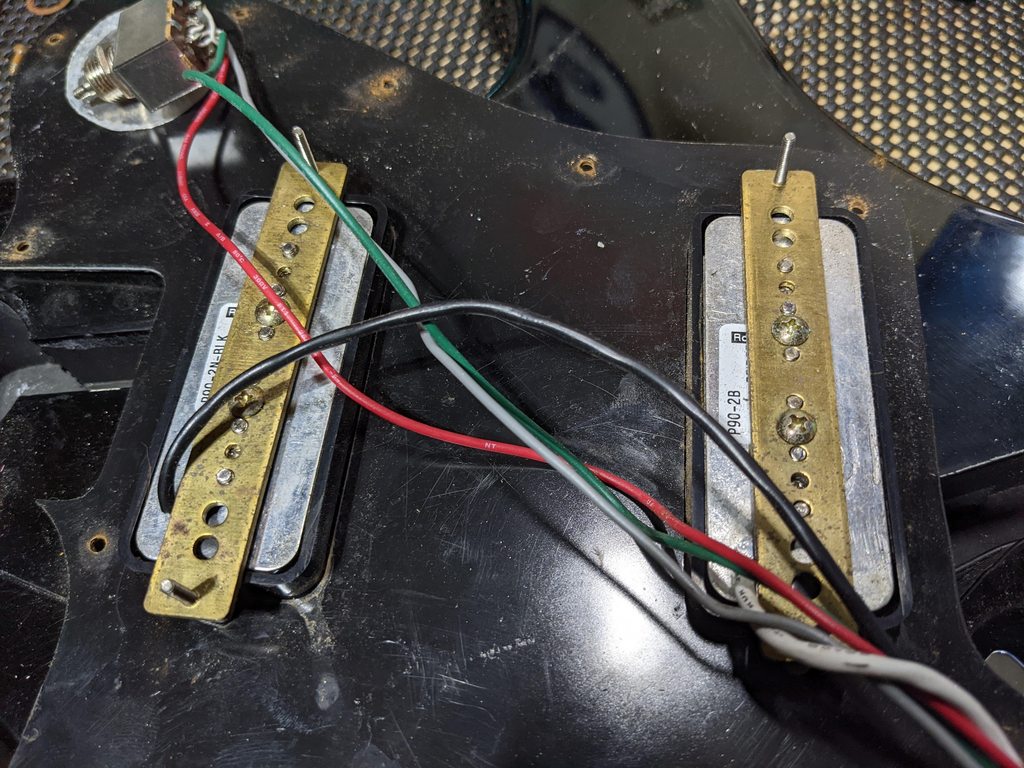 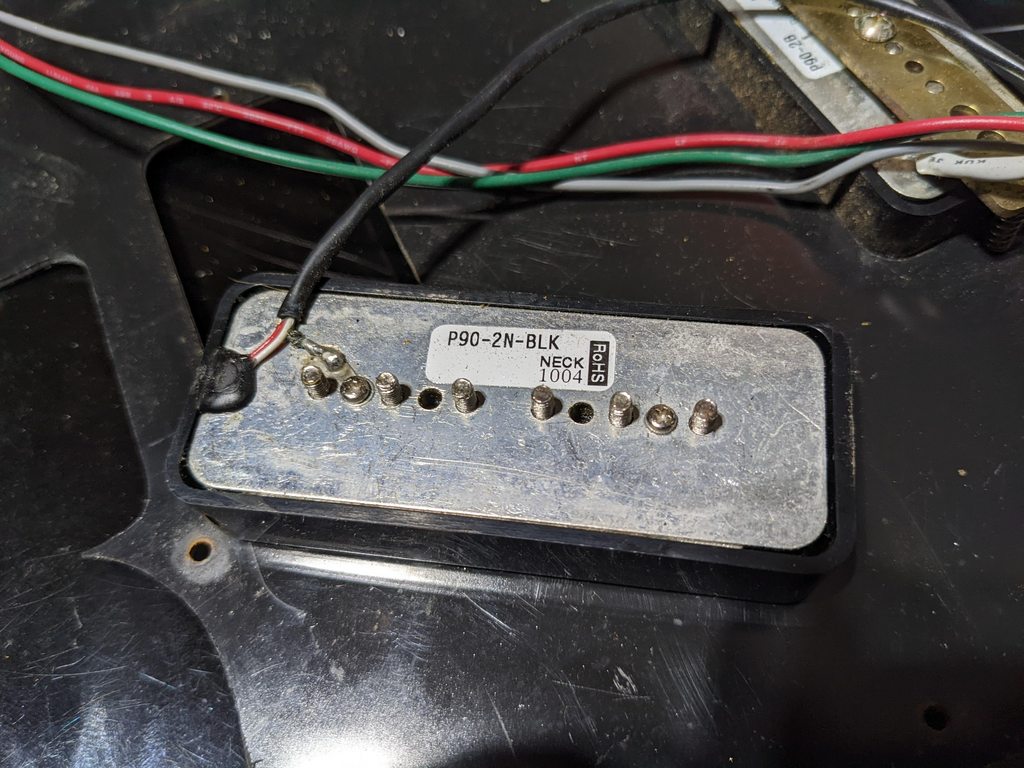 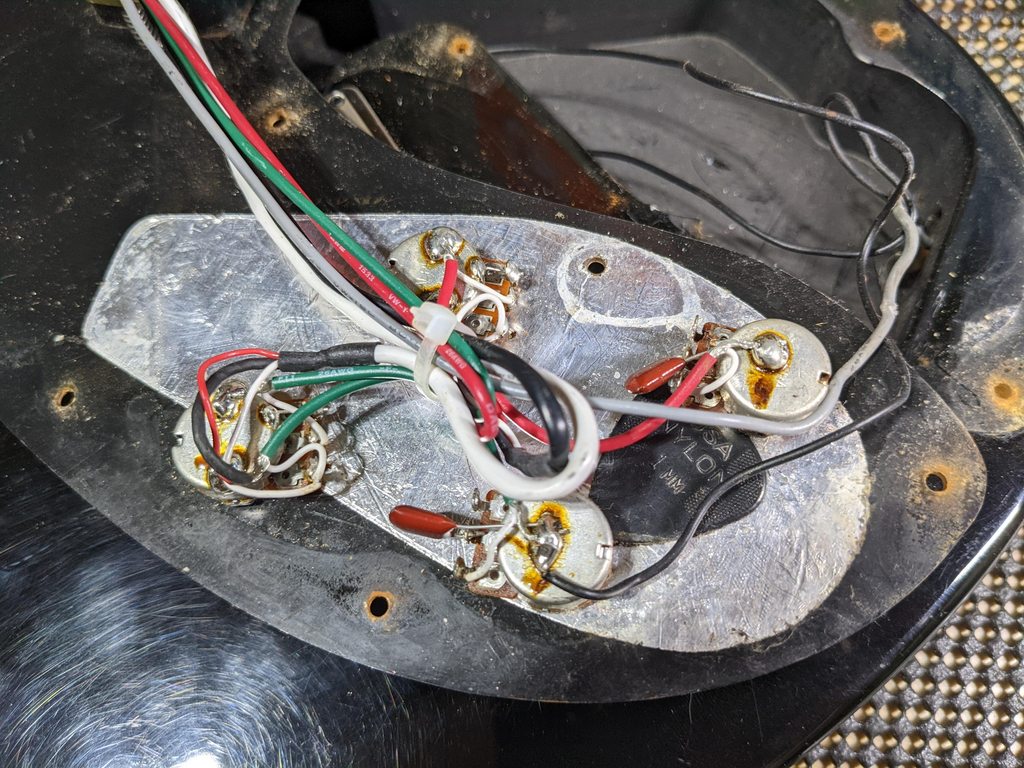 Next up I'm gonna install the tuners. These conversion bushings are still too small to fit, but only by a little. So, some tape around them fixed that. 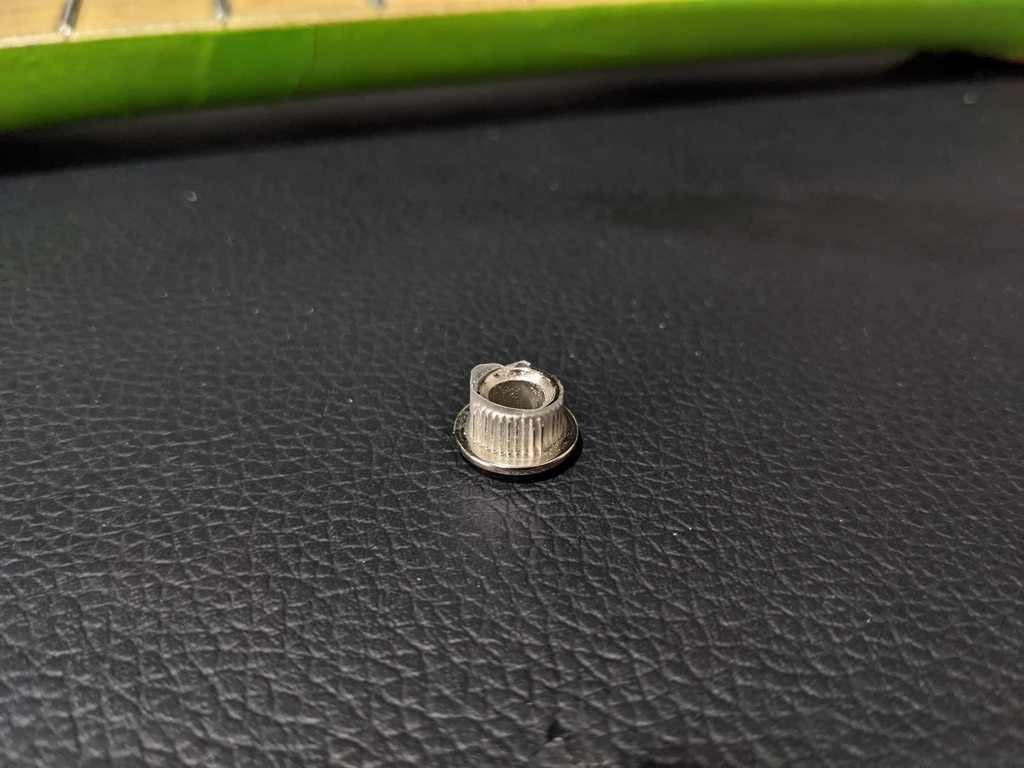 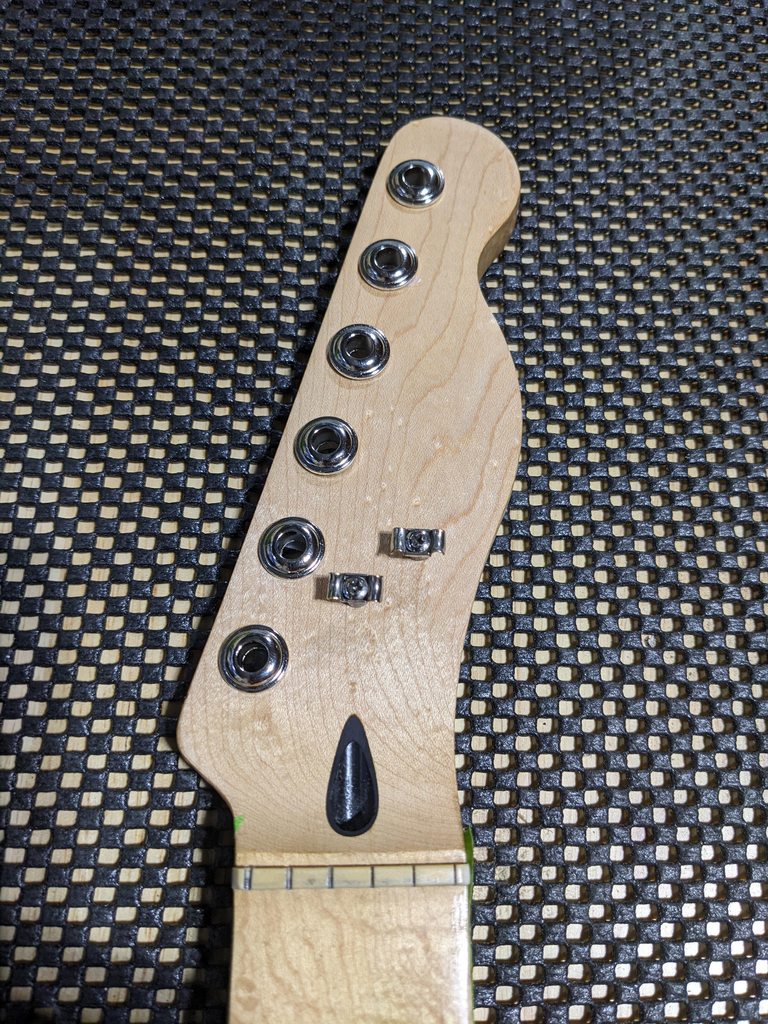 After the tuners are on, and a bit more cleaning, I'll put strings on and give it a setup. Looking forward to seeing how it sounds.
Top

I've never considered wrapping a bushing in tape to fit a larger hole, what a simple solution. I think I once made a dowel, glued it in and drilled a new hole just to make a bushing fit it - a shitton of time and effort it took me to do.

As far as I remember those P90s have to be super hot. What resistance do they have?

man, what a transformation this thing is getting.
Check out Runway Runaway by Saturday's Child

I've always loved this model of Tele, can't wait to see it even fancier

I've never considered wrapping a bushing in tape to fit a larger hole, what a simple solution. I think I once made a dowel, glued it in and drilled a new hole just to make a bushing fit it - a shitton of time and effort it took me to do.

As far as I remember those P90s have to be super hot. What resistance do they have?

Without the conversion bushings I don't think the tape would work. They had maybe a .5 mm max gap, just enough so that they don't press in place, but also don't need a more permanent solution. With the tape, they don't fall out, but also don't want to sit flush with the headstock face (tape makes it want to slide out a bit). If it becomes a problem I'll either use different tape or come up with some other solution.

As for the pickups, I didn't think to measure resistance when I had the pickguard off. But next time I do I will. They do sound hot, in a good way. It's like a cross between a JM, a Tele, and a hot humbucker.

That said, I did get it playing!

I picked the Kluson style tuners because 1) they're reliable and cheap, 2) they look the part, and 3) they cover up the holes from the old tuners.  But I definitely forgot how much of a pain it is to make them line up right, underestimating that $25 Amazon specials with conversion bushings mayyyybe just might not be perfect on a guitar never meant for them

I'm OK with the results considering the cost. 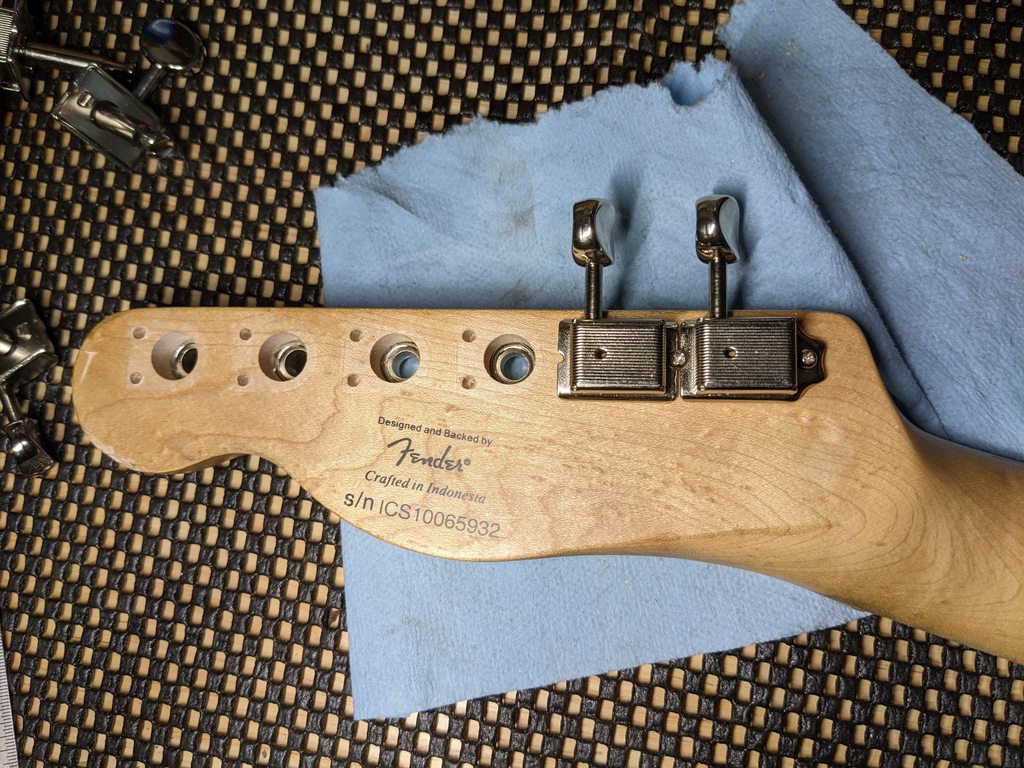 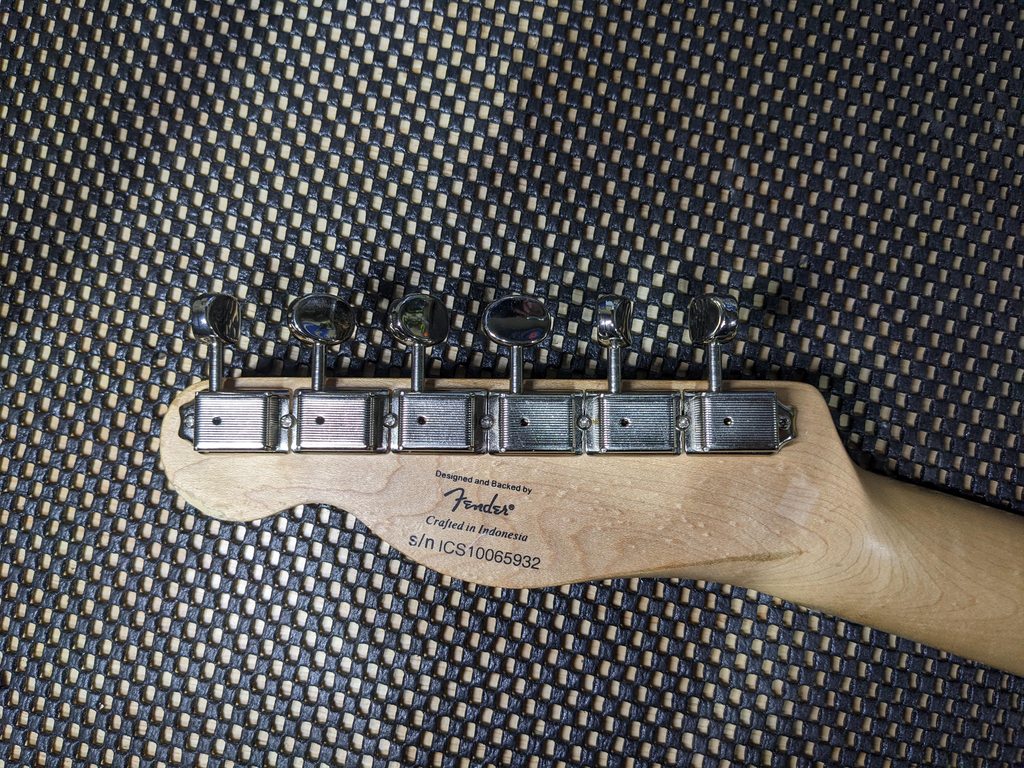 After replacing (most of) the rusty bits and giving it a quick clean and polish, it looks like a whole different guitar.  Needs a headstock logo and I might replace or paint the pickguard.  Decided I'm keeping these pickups so I will probably also get the rust off those screws at some point. 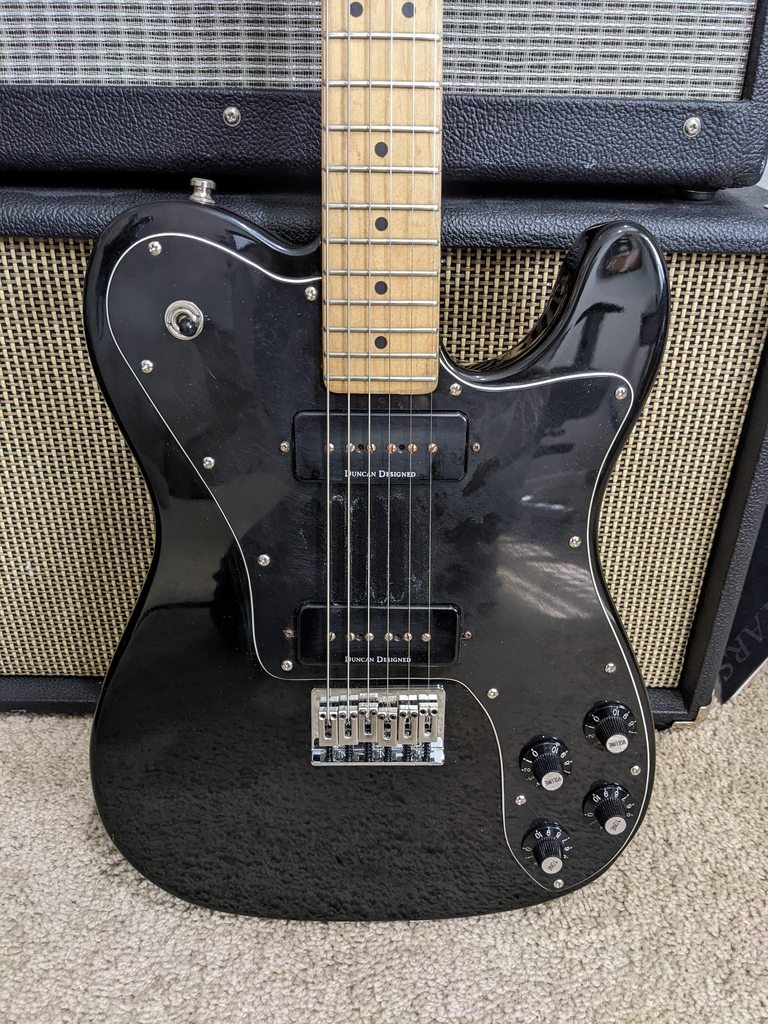 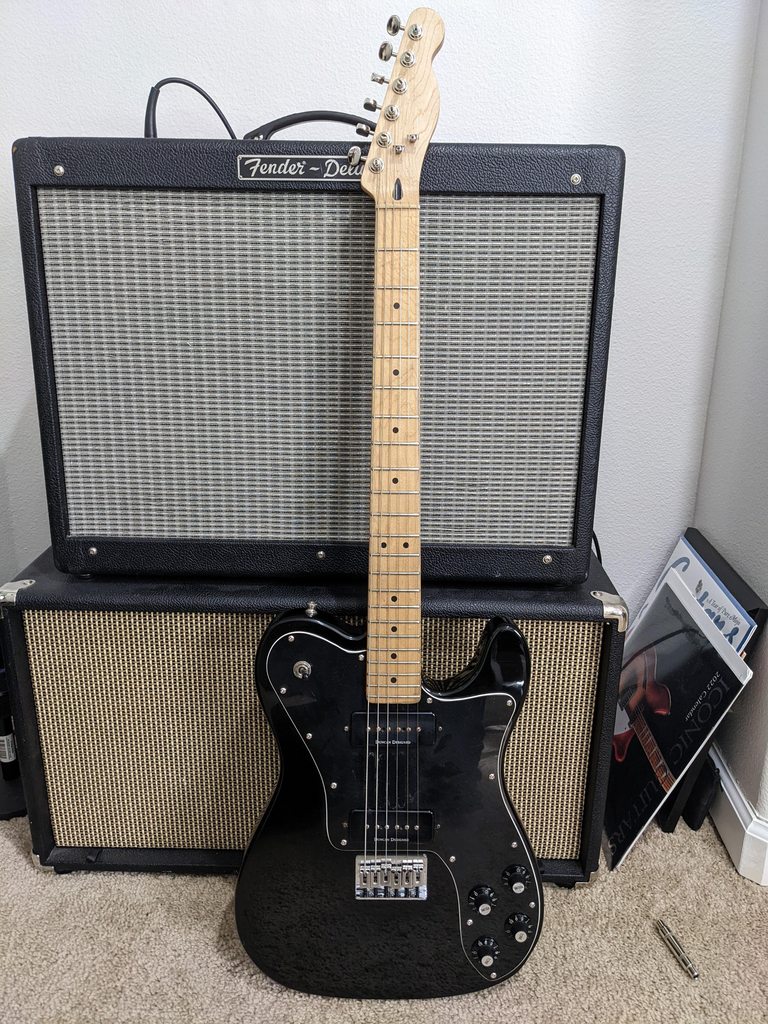 Side note, setting it up was odd.  I put a shim in the neck pocket, just a thin piece of cardboard no more than 1mm thick, and that made it impossible to get the action right.  So I removed it and, surprise, it's great.  But I might try putting a smaller shim in, because after removing it the saddles are angled down.  Not a problem, it's just weird.  Never seen that before. 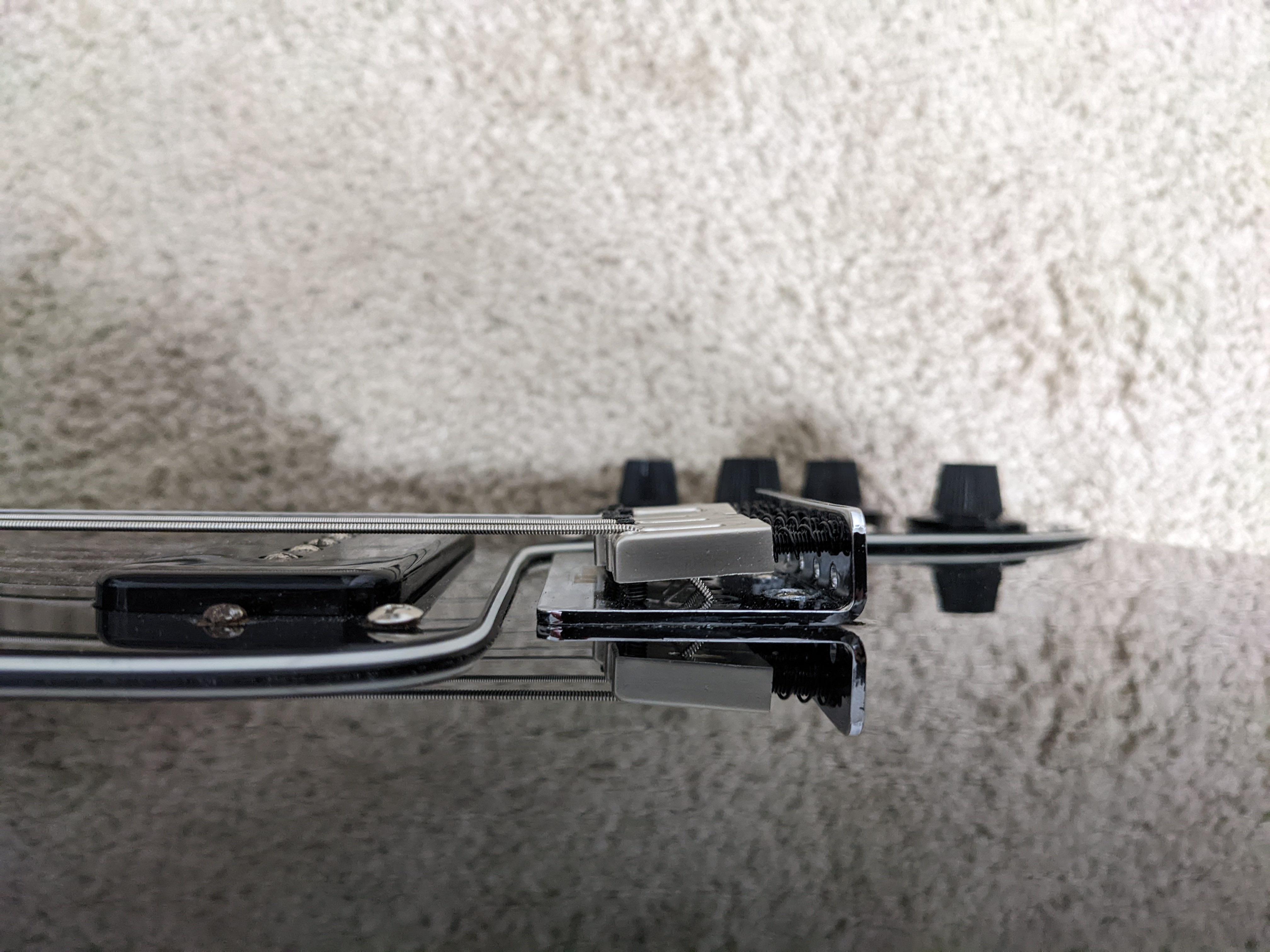 Working on repairing the body next, but now that it's a player I'll probably shift focus to other projects for a while.
Top