pictures of your gear here

pictures of your gear here

I dont have much of a pedal board:

I want to put some pics of my DIY stuff up, but don't have any of them in boxes, just bare circuit boards ATM. I'm too broke to buy the stompswitches and jacks for them. When I get some finished I'll get some more pics of them.
Top

Having the daddy-o before the wah helps give a needed boost and still lets me use it as a nice pre-gain before the blues driver. I dont' much like the daddy-o by itself, but it's good for little boosts. The dynacomp doesn't have power right now until I get another power source thing.

These are the other pedals I'm not using live right now.
As soon as I get a slightly bigger case/board and another power block thing, The Boss fuzz and delay are goin' in.
Top

these are about a year old, and feature about half the pedals i have. some are gone now.

but yeah, i will update in a bit when i get a digital camera(one day when i stop buying stomps i will buy one)[/img]
Top

a view of my studio area from the door....

and i know what your thinking whats that boss pedal with the white foot switch?

its the bender sound 'n' wave!! 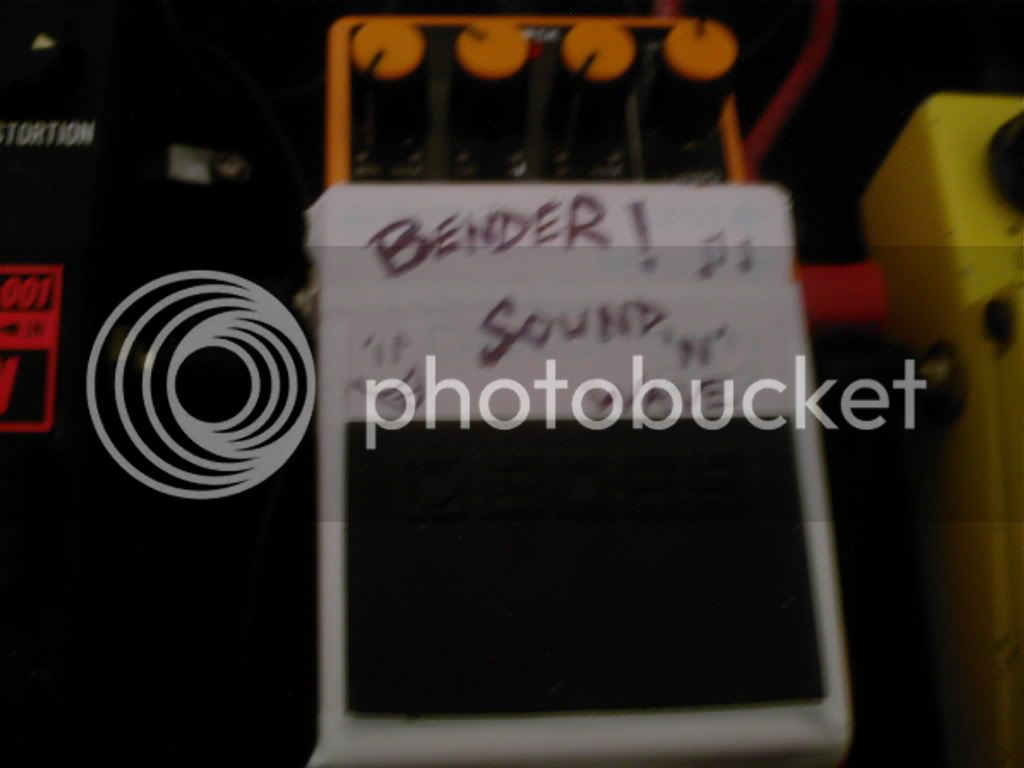 Something about all/almost all the pedals right way up I think. Anyway looks wicked. and nice one on the bent to fook DS-2, that thing is useless stock.

Got any plans to upgrade your patch cables? I used to use those multicoloured cheap molded ones and never realised how crappy they are for your sound until I upgraded them to George L's from Mr. James Diago.

By the way have you seen that ToneKing amp they've made?

I know what I want for Christmas - money from everyone so I can get one. TOO FUCKING HOT.
MadeByMike.co.uk - Handmade Pedals and Custom Builds
Facebook - Twitter
Top

Also bought a Turbo Rat distortion the other day for $48 which I'm waiting for to be shipped.

Dunxys head and 1x12 cab. I sold my Blues Junior and currently on the look out for a Classic 50 in tweed... *licks lips*

Notice the Vestax on the desk

here is my board in better light(sorry i keep posting this shit, i will delete other entrys of mine in a bit)

new pictures of boxes. amps and guitars and a maestro uss-1 will be soon coming.

sadly, this is only about half the boxes and racks i own, you can see more in the other photos in this thread. i also have a new tape echo i need to snap pics of.
Top

I just decided I'm gonna make a list of all the pedals I've ever had- HOLD ON TIIIIIIGHT! (asterisk = sold)

I'm sure there's more, but my head hurts.

What I own.
Fuzz factory
Big muff
Boss giga delay

What I have owned.
Ds-1
Ds-2
Small clone
and some digi tech pedal

My computer were I record shizz.

Q: Is there even a signal left after running through all of Hurb's tonesuckers?
Top

He mimes to a loop of Louie Louie on his Headrush so he can pretend there's some signal left.

Sorry for being suckh a knob.

johnniespring wrote:a view of my studio area from the door....

what's that black one on the floor?
High quality, low popularity Ecstatic Fury

Sorry for being suckh a knob.