So my 66-68ish Gretsch Corvette has been sitting for like 20 years without a pickguard so after many, many attempts I finally made a satisfactory one.

The original was one of those nasty ones that deteriorate while leeching out some corrosive gunk which trashed some of the pots and pickup selector switch.

I was able to work up a trace and transfer it on to a template, the only hard part, which was why it took a few tries, was the neck pickup opening, which I finally was able to sort out.

I had a the router slip on the end and mess up the back edge but I decided to let it go and just put it back together so I could play the damned thing.

Not only do I need to replace the nut but, after wiring and rewiring and rewiring, I discovered the bridge pickup needs a rewind. Once I get that done (it'll be awhile, I'm unemployed!) I'll redo the guard one more time.

I'll still need to finish replacing the nut and I'll have to fill in and redrill many of the the pickguard mounting holes. I finally got around to doing some work on it. I also posted my first ever blog post on my webpage.

I essentially made it into a single pup guitar, like all the cool kids are doing these days. I also redid the nut and put on a proper Bigsby bridge. 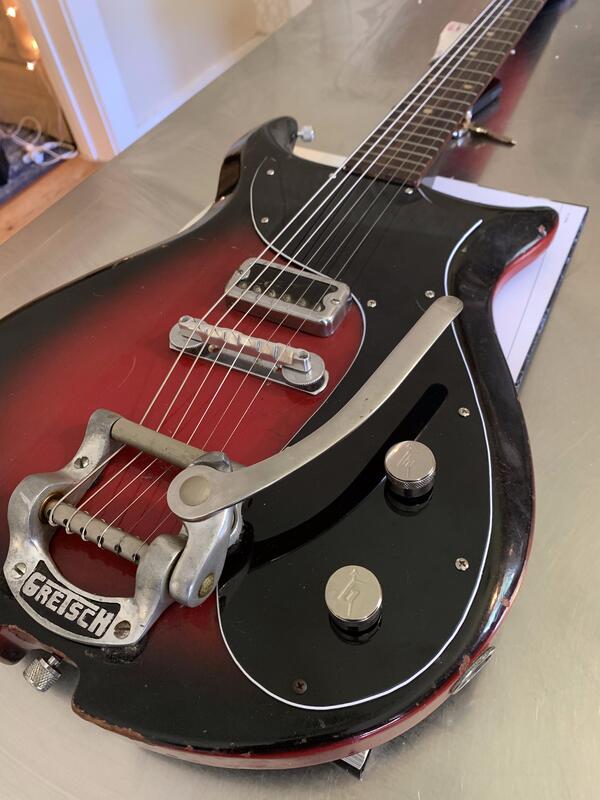 Looks awesome! How do you find the sound of the Hi Lo Tron? It's not your average "drive your amp to tasty farts" type of pickup as far as I know, but I imagine in this day and age with dirt pedals of various flavours it shouldn't be problem.

It’s somewhere between a nice Mustang and a P-90. It’s got some nice dig in the mids, not too much snap. I’ve only run it in my headphone amp since I wired it up but I like it.

I had a Gretsch Tennessean with HiLo Trons back in the 80’s that could bark with the rest of them.

Of course we know most the tone is in my fingers.
► Show Spoiler

True. That's why French chefs like to kiss their own fingers, they say "To hell with the food, you've no idea how much tone I have here!"

It looks sexy. Are filtertrons a direct replacement for Hilotrons? If they are, you may experiment in the future with putting one of those GFS filtertrons for more bark

Did you put that bridge for a better string angle?

Oh my I love that.
Top

The other bridge was a little on the odd side. I added the other one because it just looks more correct. Intonation seems ok. Still need to finish setting it up.
► Show Spoiler

good on you keeping with it!

how's the trem working after all these years?
Check out Runway Runaway by Saturday's Child

how's the trem working after all these years?

Love this thing, it really works best as a one pickup guitar....the before pic looks like a bad mod tbh.
Top Got that nut dialed in. I still need to make it pretty but it plays nice now, I can finally barre a Bb at the first fret.
► Show Spoiler

Nice job. If you can't barre Bb a guitar is as good as firewood. That's the real reason Pete Townshed was breaking his.
What tools did you use to cut the slots? I don't have any special one and need to cut them abit deeper on my strat

I recently bought a set of nut files from Stew Mac. They are kinda expensive but I got them on sale.
► Show Spoiler

Also you can try looking in your local hardware store for "needle files".
cogito ergo sum...thing or other...
Top
Post Reply
Jump to
25 posts